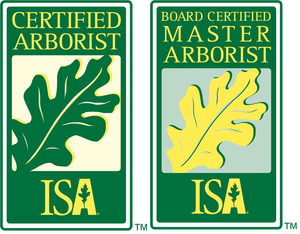 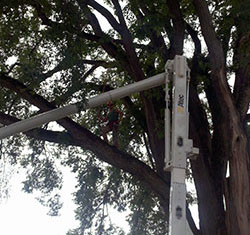 A support system has been added to Wellsboro’s historic American elm tree, known as the Jailhouse Elm. The tree is over 237 years old. Elms have lived to be 300 years old.

The tree stands on Tioga County property on the corner of Main Street and Central Avenue in Wellsboro in front of the former Sheriff’s residence, which today is home to the Wellsboro Area Chamber of Commerce and the Tioga County Development Corporation.

On Thursday, July 24, six employees from Dincher and Dincher Tree Surgeons, Inc. of Williamsport worked for eight hours, from 7:45 a.m. to 3:45 p.m. to install a Cobra dynamic support system to protect the elm’s crown against damage caused during 60- to 70-mile-per-hour wind incidents. The new system will not protect the Jailhouse Elm against damage in a tornado or from lightning strikes.

Those doing the installation included: Bernie Dincher, a board certified master arborist and owner of Dincher and Dincher; his son Jake Dincher and Chad Eckert, both certified arborists; and climbers Kevin McDermott, Todd Grove and Dan Erbe.

Bernie Dincher said, “During the installation, four of us were in the air, including Chad who worked in the bucket all day, and two of us were on the ground. Each rope unit was assembled on the ground and then taken up into the tree and installed.”

He explained, “The purpose of doing this installation is to keep the tree from losing any more large branches. This is a system of synthetic ropes with shock absorbers built into them. Unlike the steel systems that are rigid, the Cobra system has some flexibility to it.”

Dincher continued, “We put 14 or 15 of the rope units in the tree’s crown. They connect most of the major branches back to the main stem. Now, instead of the branches swinging back and forth individually in a windstorm, the whole top of the tree is tied together and acts as one unit. If a branch does break off, it won’t fall to the ground, risking damage to the building or parked cars or serious injury to people who are in the building or happen to be walking by.

The new system was tested almost immediately. Dincher said, “We were finishing up just as the storm began on Thursday. They were predicting some pretty bad winds. The system being in place was good for the tree because it might have sustained some damage in that storm otherwise.” Dincher said, “There was an old cabling system in the tree that was deteriorating and falling apart. It was probably installed in the 1960s. We took the last of those cables out in May of this year when we were removing a broken branch.

“I mentioned to Julie VanNess, (executive director of the Wellsboro Area Chamber of Commerce) that it would be a good idea to put in a new system because the elm was losing branches.”

The Jailhouse Elm is the fourth largest American Elm in Pennsylvania. Because of its age, the tree is more susceptible to physical damage. Routine removal of dead wood is essential to managing the Jailhouse Elm against Dutch elm disease, Dincher explained. Pruning is done on an as needed basis to remove any dead or dying branches.

The bigger threat to the Jailhouse Elm, according to Dincher is elm yellows, a virus-type organism, which is making a comeback in State College and wreaking havoc on the trees there. He said, “There is no known cure for elms yellows so if this tree is attacked by that disease, it probably won’t survive. We are just going to have to continue to keep our eye on it.”

On July 24, 2009, a major branch broke off the Jailhouse Elm raising concern that the tree would be more susceptible to both Dutch elm disease and elms yellows. Although no one was exactly sure what caused the branch to break, it was believed that a lightning strike might have had something to do with it.

The damaged area on the elm’s trunk is 12 to 15 feet in length and 16 inches in width at the bottom and six to seven inches in width at the top. Dincher said, “That wound is the same size today as when it first happened. Closure is starting from the sides but the wound will never close completely because it is too big of an injury.”

On Friday, Aug. 14, 2009, three certified arborists employed by Dincher and Dincher removed a total of 1,500 pounds of foliage or 500 pounds from each of three branches above the area damaged on July 24, 2009. Dincher explained, “The purpose of selectively thinning out some of the tree’s crown above the damaged area was because the tree did not have the wood strength capacity to support the weight of its crown.” The tree’s historic significance was recognized in October of 1979 when the Jailhouse Elm was placed on the American Forestry Association’s National Elm Registry at Washington, D.C. and a certificate and plaque were received from the Elm Research Institute of Harrisville, New Hampshire to honor its age and beauty. The certificate reads: “This is to certify that the American elm located on the property of the town of Wellsboro and known as ‘The Jailhouse Elm’ is hereby designated as an historic elm and duly enrolled in the National Register of Historic Elms at the Elm Research Institute Harrisville, New Hampshire.”

The plaque was installed on the elm’s trunk on Oct. 1, 1979. It read: Historic Elm, planted in the 1700’s. This tree is hereby designated a historic landmark to be honored and preserved for future generations.” Neither Dincher nor the Chamber has any idea what happened to the plaque. It may have fallen off or someone may have taken it.

In June of 2005, the Jailhouse Elm was designated as one of Pennsylvania’s Big Trees. It scored 303 points to be listed fourth on the “Champion Trees of Pennsylvania” website.

In 1979, the Jailhouse Elm had a circumference of 14 feet, 8 inches at four and a half feet above ground level, was 99 feet tall and had a crown spread of 95 feet. By 2005, 26 years later, those dimensions had changed. Its crown spread measured 100 feet. It was 96 feet in height and 15 feet in circumference. Dincher noted that the tree’s dimensions are about the same today as they were in 2005.

According to American Forestry Association researchers, any tree more than 13 feet in circumference was standing before the American Revolutionary War, which started in 1775. In other words, the “Jailhouse Elm” is more than 237 years old this year. As of this October, the Jailhouse Elm will have been standing for 228 years on land that became the property of the white man following the 1784 Treaty of Fort Stanwix signed in October of 1784. It has been part of Tioga County for 208 years since the County was formed on March 26, 1804 and, for 206 years has been part of Wellsboro, which was designated as the county seat, on July 14, 1806.

Ready to get started?

Looking for a quote or additional information?